Come to a show! 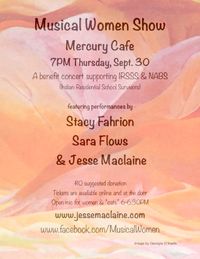 Tickets are available online and at the door. Suggested donation is $10.

Stacy Fahrion is a composer and pianist who often writes in a style she describes as “Whimsically Macabre.” Originally from Iowa, she made Denver her home in 2004 where she has been a popular performer and piano teacher for nearly two decades. Inimitable poet and music lover, Wayne A. Gilbert, describes her work as: “Offbeat quirky seriously beautifully funny mischievously madly serious.” Stacy loves exploring polyrhythms, odd-meter grooves, unusual scales, and microtonality. She is rumored to have a strange obsession with the song Itsy-Bitsy Spider. Whimsically Macabre music is lurking in all the usual places on the interwebs. You can find out more at her website, WhimsicallyMacabre.com. In addition to being an enchanting performer, composer and music teacher, Stacy creates piano sheet music (published by Piano Pronto Publishing) and includes books such as Lullabies for Arachnophobes, These Are Odd Times, and Polyrhythms for Pianists. When not pounding out minor key boogies on the piano, Stacy enjoys playing reckless chess, exploring nature and documenting the antics of her two adorable rescue kitties.

Sara Flows is a passionate singer/songwriter who loves to combine poetry and sound vibrations. She has been playing piano for 20 years, guitar for 11 years, and vocalizing verbal expressions since the day she could speak. Sara aims to spread good energy to the collective through her music. You can often find her in and around Denver spreading succulent serenades or dropping rock bombs full of love. You can also find her online...

Natural born singer Jesse Maclaine was forced to take piano lessons as a teenager, this led her away from a secure career path in musical theater and into a dangerous and exciting life as a professional musician... After 20 years as an indie singer-songwriter she has written over 120 original compositions, self-produced 5 CDs, created dozens of music videos, received glowing accolades from local and national press, had her songs featured on popular radio stations and podcasts, composed/arranged scores for a fantastical full length musical comedy and an absurd feminist horror comedy, and performed thousands of classical music, pop, rock, folk, blues and jazz concerts in renown venues all over America. Jesse has shared recording studios and stages with many notable musicians and in 2018 she opened for Melissa Etheridge!